Maldives is an island in the Indian Ocean with combination of natural beauty and sea resources.
Know More

Maldives is an island located in the Indian Ocean and is part of South Asia.  I heard of them in the 1980’s faintly and did not pay attention.  Then you did not have internet or Google where you could search:” History of the People Maldives “and press enter.

The people of Maldives look like Bengalis or Indians. Huh since when did Indians colonies this Island or the British Raj? If that’s not enough the population of Maldives is 100 Percent Muslim.

Maldives is a beautiful island country whose capital is Male.  The feminists are angry, why it is not “Female”? Just kidding. I was wondering that myself.

A popular Island in Male dives known for watersports.

North of Male ,one of the top places to visit.

Look to dive ,well this is place is located to the North and called Banana Reef, for its shape. 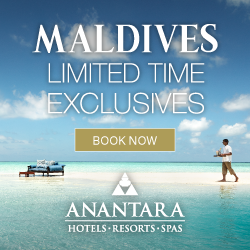 There are many offers for Maldives and these offers are seasonal. In the winter times actually does not matter much since lowest temperature is 25 degrees centigrade.

The people of Maldives look wheatish or wheatish fair and look like a Bengali Muslim from Bangladesh. They are Muslims too.

The people were originally fisherman who came from India and Sril lanka between 300 BC and 300 CE. The Mahavamsa (Great Chronicle) of Sri Lanka written in Pali script, talks about history of Sri Lanka from time Prince Vijaya from comes to Sri Lanka in 500 BC to his reign. He is the son of a King called Sina Bahu .  Sina Bahu ‘s father as a dacoit and mother a prince in Vanga or Bengal. The story or legend is not covered but why we people from Bengal look like Sri Lanka and Maldives is getting clear. The King Sina Bahu sends his ruthless son Prince Vijay out of the country. This Prince takes two ships and he lands in Sri Lanka. The other ship did not make to Sri Lanka but Maldives. That is the origin of both Sri Lanka and Maldives is from Bengal. No wonder they are friendly and nice.! The place of Birth of Prince Vijaya according to the Muslim scholar Allama Ahmed Sihabuddin was from Kalinga. The people of Maldives worshiped nature like sun, moon and stars.

Maldives has a beautiful scenery and is a place where one can relax and have a rest from the worries. The temperature of Maldives is about 25 Degrees centigrade to 32 degrees  Centigrade.

Traditional food is rice and seafood or other curry. Side dishes are onions and chili. Fruits are :

During the 3rd Century due to King Ashoka’s initiate to spread Buddhism the people of Maldives became Buddhists. These people were from a place called Bairat(ibid), which is in Rajasthan. A Buddhists temple in Bairat, Rajasthan, India exists with name Bairat Temple.

Maldives had an interesting story how they accepted Islam. The person who is credited with this task was Abul Barkat Yousuf Al Barbary. The last name indicates either city the person was from or tribe or famous anything person was connected to.

Many other examples, last name is the town they came from. Both mentioned are Muslim scholars from Gilan and Bashra. Legend says due to efforts of Yousuf eventually king became Muslim.

One such great effort is as follows which is not accepted in modern history.

That a demon used to terrorize the island. The demon demanded virgin women to be given as a tribute. That woman was left alone in a temple near the sea where she was ravished by the demon and murdered.  The king chose the virgin who should go each year to temple for the sea demons.

Abu Yousuf tries to persuade the King to convert to Islam but he refuses. Abu Yousuf was a Hafiz (A person who has memorized the Holy Quran) from Morocco.

He volunteers to go in place of the girl to face the Demon. Every body is scared about Abu Yousuf but surprisingly nothing has happened since he recited verses of the Quran. The demon or

The Book of Ancient Meedho History talks the people of Maldives leaving Buddhism and accepting Islam in 1127. The priestess family of Maldives was named Kaal Hai Haru. Kadu Kumar was a man from Patna,Bihar,India and he married a woman called Kaaman Haru from Maldives. So that’s how they got the name.

The Islamic Perspective to the Legend.

Well. The demon was a jinn. In the Quran, the verse says:

And the jinn, We created before from scorching fire.

The Jinn were a different creation created around several thousand years before creation of Mankind.

The Jinn are invisible ,made of fire, can read your mind and move at alarming speeds.

Verse of the Quran are fatal :

"Allah – there is no deity except Him, the Ever-Living, the Sustainer of [all] existence.
Neither drowsiness overtakes Him nor sleep.
To Him belongs whatever is in the heavens and whatever is on the earth.
Who is it that can intercede with Him except by His permission?
He knows what is [presently] before them and what will be after them, and they encompass not a thing of His knowledge except for what He wills.
His Kursi extends over the heavens and the earth, and their preservation tires Him not.
And He is the Most High, the Most Great."

The Ayatul Qursi or Verse of the Throne is very powerful verse of the Quran.

Currently Population of  Maldives is .  100 % of the population are Muslims.

Maldives is a great place to relax and enjoy the sun and weather. Among the interesting  things to see is an under water restaurant resort called Antara Khivah ,a 5 star resort. You can see the fishes ,turtles and other swimming around on top ,as you sip a cup of coffee.

The people of Maldives are originally from India.  But there is a mixture of Arabs ,Sinhalese. Prior to Islam ,people were following Buddhism.

Currently they are 100% Muslim. People of Maldives are usually friendly to visitors.

Ibn Batuta the famous Moroccan traveler who escaped from Delhi and finally to Maldives. In Maldives he was respected and appointed as Chief Judge. There also he   got married to a total of 3 wives. Through his wives he gained connections and close to Royal family. Among the food eaten by this famous traveler was

He talks about Abul Berkat the Berbar also from Morroco who drove away the demon''  and ultimately convinced king to become Muslim.

Reliable men among the inhabitants of the islands, like the jurist (faqîh) and teacher (mu'allim) 'Alî, the judge 'Abdullãh - and others besides them - told me that the inhabitants of these islands were infidels. Subsequently a westerner named Abul Barakãt the Berbar who knew the great Qur'ãn came to them. He stayed amongst them and God opened the heart of the king to Islãm and he accepted it before the end of the month; and his wives, children and courtiers followed suit. They broke to pieces the idols and razed the idol-house to the ground. On this the islanders embraced Islãm and sent missionaries to the rest of the islands, the inhabitants of which also became Muslims. The westerner stood in high regard with them, and they accepted his cult which was that of Imãm Mãlik. May God be pleased with him! And on account of him they honour the westerners up to this time. He built a mosque which is known after his name.“

Places to Visit in Maldives

Maldives was a British Protectorate since British take over of Sri Lanka in 1796. The status being made formal in 1887.Maldives became independent in 1953.

Did you know Maldives is a melting point of cultures. Indian, African, Arab,E uropean, Asian.

People in Maldives used to build houses with Corals ,but that is forbidden.
Check Out Our blog

Many Muslim packages for halal tourism can be found.

We at LesGo  provide beautiful travel packages from India ,Bangladesh Us and Middle East.